When I was a kid, store-bought costume choices were limited. There was half of an aisle of costumes at Walmart. Not that that applied to me, because my mother always made our costumes, by which I mean that she actually used a sewing machine.

At the time, I thought it would be pretty nifty to don one of those ready-to-wear costumes. But looking back on it, knowing that my mother put so much time and work and, well, love into our costumes makes my Halloween memories even more special. And while I'm throwing some much-deserved appreciation my mom's way, let me also tell you that she made several costumes for me during the high school years for theatrical productions and the like. I think I had her thiiiiis close to sewing a Little Women-esque dress for me, though thankfully she thought better of my "Just to school" response when she asked where I would wear it.

That's what was on my mind when I decided that homemade costumes are the only costumes for us. Unfortunately, I'm not quite as skilled with a sewing machine as my mom is. No matter, though. The costumes I devised for this year require ZERO sewing.

A few words on costume selection: I determined that this year would very likely be the last year that the costumes would be MY choice. No doubt, next year Linus and Veda will have opinions of their own. So I knew that I had to make this year count. My criteria? 1. I wanted something with a twin theme. As much as I hate talking to strangers about having twins, I love their twinness.  2. I knew it had to be the thing that I would otherwise always regret that they had never dressed up as. 3. I wanted to make their dad smile. The perfect fit? Boy/girl twins Luke and Leia. Their Star Wars-obsessed father loved it.

Oh, and another thing to love about homemade costumes? Almost everything you'll see here on the materials list will be used again, either for other crafting projects or for future wear. 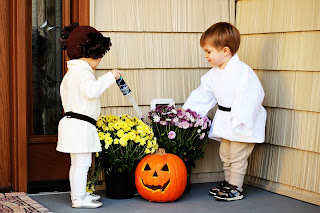 Maggie
I left a teaching career to become a professional mom to my boy/girl twins. I blog about healthy food for babies and toddlers, navigating mommyhood, and the cute stuff my kids do. I'd love to hear from you! E-mail me with comments, questions, or suggestions at mmartinphoto@hotmail.com.